This week, we continue the How They Did It series on this blog (a series of interviews that chronicles the journey of successful writers from newbies to writing stars) with an interview with the super-talented author and scriptwriter, Advaita Kala. Advaita’s first book Almost Single was a publishing trend-setter in India. The super-picky Publisher’s Weekly described it in truly positive terms (“…Kala achieves what many cannot—she makes her readers laugh aloud…”). Not one to rest on her laurels, Advaita followed it up with writing the script for the commercial and critical success, Kahaani. So, without further ado, presenting Advaita Kala!

Have you always wanted to write? Or, did you have different career aspirations while growing up?
Writing was always a question of “who” I was as opposed to “what” I did. I didn’t set out to be a writer. I think very few people do, in that sense…it’s a difficult way to earn a living. But it was something that fuelled me and that made life meaningful, gave direction to my imagination. It was cathartic and remains so. Why am I saying all this? Mostly because although my writing is in the public domain it remains a very personal endeavor.

How long did you take to write your first book, Almost Single?
I think about eight months for the first draft, it was an easier book to write. Very intrinsic, an outpouring of sorts, a fictional account of a very real predicament for many women in India. 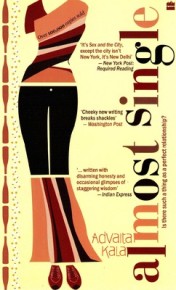 From your experience of your own book and others you’ve known, how long does a writer usually have to wait to see the book published (after the manuscript has been accepted)? Is there anything specific a writer can do during this time to make the most of the wait?
It usually takes a minimum of 12 months. My suggestion to a writer would be to keep writing during this time. Your work going out into the world be it a book, film or TV show is a happy occasion but also a draining one. So it’s best to emotionally disconnect by the time that happens and the easiest way to do that is to move on to the next.

Would you advise writers to first approach a literary agent, or is getting in touch directly with the publishers a good enough thing to do? Did you chalk out a specific plan for Almost Single?
In India, publishers are accessible and receive submissions directly from authors. I have always dealt with my publishers here and have a personal relationship with my editor Karthika at Harper Collins, so I go to her directly even when I have only an idea or a bad day. She gets me and that’s really all you ask for as a writer, someone who gets you.

Does it help for writers to have a daily minimum wordcount or fixed number of hours for writing?
Ha! Yes, if you’re disciplined, then yes. I am notoriously bad at writing to word count or by routine.

Given the modest advances and royalties in Indian publishing, how much income can an aspiring author realistically expect from a literary career spanning several years? Is the oft-repeated advice to not leave that day job true?
Hard to put a number on it, there are many variables. I think stick to your day job till you can get out and write full time. Time is the greatest luxury and the only currency a writer needs.

Any interesting personal anecdotes stand out in your mind in your journey from successful career woman to author?
I think I was never a successful career woman (I made the switch early on in my career), so the fall or the high was never that much of a big deal. I was honest about what I did and extended that honesty to my writing, that’s all. As for anecdotes, that’s a whole other book, my life is very eventful but I like to reveal only through fiction! I am a very private person…..till it comes to the writing!

About your new show Airline, how did television writing come about?
Miditech the production company got in touch with me and the idea of doing television was something that challenged me at the time. I am very open to taking risks and trying out new things. I think my greatest strength as a writer, is absolutely no fear of failure. So even after winning multiple awards for a film, I turned down movie offers and worked on a TV show. Pretty dumb, right? We will probably find out together ☺

3 thoughts on “How They Did It (Authors): Advaita Kala”